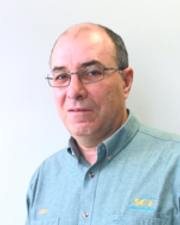 Paul Cartwright is a Mining Engineer with over 36 years’ experience in mining. He currently holds the post of Chief Geotechnical Engineer & Director for Strata Control Technology (SCT),
an international rock mechanics consulting and research company.

Paul joined the National Coal Board (later British Coal) in the late 1970's as a Mining Student Apprentice and following graduation held the supervisory positions of deputy, overman and rock bolting engineer at Lea Hall Colliery.  Paul transferred to the Rock Mechanics Department at British Coal's Technical Services and Research Executive (T.S.R.E.) at Bretby in 1990.
On privatisation of the British Coal Corporation in 1994, Paul became a Senior Geotechnical Engineer with the newly established Rock Mechanics Technology Ltd. (RMT) before migrating
to Australia in 2001 to join SCT.

In 1979, he joined the National Coal Board as a Student Apprentice. Following completion of his apprenticeship, Mining Degree and MQB First Class Certificate of Competency (UK mine managers’ certificate) he was promoted to the position of mine deputy at Lea Hall Colliery.
As a mine deputy, Paul was directly responsible for the supervision of varied underground mining operations which included roadway development, coal production and longwall salvage and installation projects. Paul was later promoted to overman before progressing to Colliery Rock bolting Engineer where he managed the safe and efficient introduction of rock bolting technology at Lea Hall Colliery.

In 1990 Paul transferred to British Coal's Rock Mechanics Department at T.S.R.E. Bretby.
Here Paul was involved in the development of in-situ stress measurement techniques and has successfully measured the in-situ stress regime in weak rock at several of British Coal's deep mines.  Paul later became more involved with the widespread proliferation of rock bolt support technology to the coal mining industry and played a key role in the introduction of rockbolting
to several British Coal mines prior to privatisation. In some instances, this was particularly challenging, in view of the multi-seam interaction environments typically found in many UK coal mines. As part of this work Paul was responsible for geotechnical investigations, the design of mining layouts and rock bolt support systems, the interpretation and analysis of monitoring results and the liaison with mine management and HM Inspectorate.

On privatisation of the UK coal industry a rock engineering consultancy was formed based around key personnel of the T.S.R.E. Rock Mechanics Department. As Senior Geotechnical Engineer for the newly formed Rock Mechanics Technology Ltd (RMT), Paul was responsible for developing and supervising the company's consultancy work at a number of coal mines and the management of RMT’s stress measurement department. To assist in his duties, Paul regularly used computer modelling techniques to simulate underground roadway behaviour. Paul was also involved with a variety of European Coal & Steel Community research projects.

Paul was actively involved in the development and utilisation of computer modelling work at a number of sites in the United Kingdom and Europe using the FLAC code to simulate strata behaviour and support requirements for underground tunnels.
Paul also used MAP3D, a three-dimensional package, to assess mine design layout implications. Paul’s experience in the analysis and evaluation of stress measurement data has assisted in the widespread application and use of computer modelling techniques as a mine layout and support design tool at RMT.

With RMT, Paul gained extensive exposure to international consultancy. This has included both coal and metalliferous mining projects in a variety of locations that ranged from the barren wastes of Spitzbergen in the Arctic Circle to the highly-varied mining environment of South Africa.
In the two years before leaving RMT, Paul had been involved in the development and introduction of a successful roof control management system into several South African coal mines as part of a corporate strategy to minimise the number of rockfall related accidents.

On migrating to Australia Paul became actively involved, at an operational level, in the challenging thick coal geotechnical environment of North Goonyella (as part of the technical services and mine planning team). Following this, Paul has been active at a number of other Bowen Basin coal mines including Newlands, Carborough Downs, Broadmeadow, Crinum, Oaky No.1, Grasstree and Moranbah North. Outside of Queensland Paul has undertaken geotechnical projects for mines in New South Wales, Western Australia and New Zealand.

As well as operational aspects of strata control, Paul has been involved with several feasibility studies for new mines. As part of these projects Paul has coordinated a wide range of related geotechnical studies including strata and stress field characterisation, roadway support design, mine layout and multi-seam interaction studies, longwall powered support design, subsidence and hydrology.

Paul became a Director of SCT Operations in 2005 and has since been actively involved in the direction and management of SCT's geotechnical services.

STRESS MEASUREMENT
Sign up for Research, Project and Product Updates