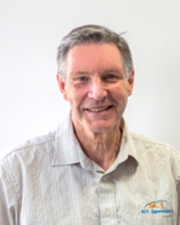 Although retired, Winton consults to SCT on a casual basis.

Dr Gale has more than 25 years experience in the international underground coal mining industry. He has a strong background in geomechanics research and development and this experience has been expanded into the field of commercial consulting. He has been personally involved in the development and introduction of leading underground coal mining technology and has an extensive international experience in the application and transfer of the technology throughout a wide range of mining environments. Countries of work experience include Australia, Indonesia, India, China, Japan, New Zealand, United Kingdom, Canada, USA, South Africa and Mexico.

Dr Gale specialises in consulting engineering design, research and training services for strata control and mine design in underground coal mines, including:

In 1989, Dr Gale established Strata Control Technology Pty Ltd (SCT), a mining consulting and research group. Dr Gale and SCT have established an international reputation as a leader in the development, introduction and application of advanced strata control design techniques and rock bolting technology for underground coal mines, with a proven capability to effectively adapt the technology to various international mining environments.

Dr Gale has played a key role in the introduction of Australian underground roadway support technology into the UK coal mining industry. From 1988-1994, Dr Gale was Project Consultant/adviser to British Coal for the introduction of rock bolting technology. The successful and widespread application of this technology throughout the UK industry, resulted in the establishment of an UK based joint venture operation in 1994 that provides SCT’s services into the UK and European market. Dr Gale was instrumental in the establishment of this company and held the position of Director (Technical) until the company was sold.

Dr Gale was the Technical Specialist (coal mining) of the AusAID (Australian Agency for International Development (AusAID) Project - India: Directorate General of Mines Safety Training Program. This project was commenced in July 1997 and ran for three years. He was responsible for the management and delivery of specialised training services to officers from the Indian Directorate General of Mines Safety. As part of this project, he made a series of visits, mine inspections and presentations to several Indian coal mining companies, technical institutes and government agencies.