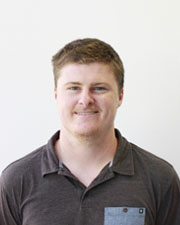 Stephen graduated from the University of Wollongong with a Bachelor of Mechanical Engineering, he joined SCT early 2018. He has since been exposed to a wide variety of different environments including local and international work, he is constantly looking to improve and optimize SCT’s systems.

Spending much of his first 6 months developing remote-capable Rock-IT probes, along with other tools and bench testing rigs, Stephen has gained useful hands on experience, and discovered many applications for his mechanical engineering skills.

Stephen was part of the Snowy Hydro 2.0 Explorations project team, he undertook several ANZI stress measurements in preparation for the proposed pipeline tunnels and underground power station. He worked in helicopter operations where the vehicular track conditions deteriorated due to poor weather conditions, airlifting the gear and personnel to and from the drill site. Some of these overcore stress tests were more than 800m deep!

Stephen has recently returned from the Philippines after completing several overcore ANZI stress measurements for Oceana Gold’s Didipio mine. This was his first overseas trip with SCT, and it was a great opportunity to learn and gain experience.